skip to main | skip to sidebar

Bicycles for a Sketch Challenge

For this card I used a Close to My Heart set, some Basic Gray papers, and wadhi tape to follow a sketch. This card will be sent to a persin in my swap group. This swap was to follow a given sketch from one of the members. Love riding my mountain bike, so I was glad for a chance to create a card that reflected that.

I participated in a swap with an online group and the theme was to make a card based on anything that starts with the letter A. I signed up for it thinking this woukd be easy but it turned out to be a challenge. I finally decided to break out sime Tweety Jill stamps and this is what I came up with.

I made a card using the Tim Holtz Crazy Cats set. I found this mask in a bunch of neglected Judith stamps. Made the word bubble using a set feom Stampin'Up! called Just Sayin' minus the wirds and added a stamp from Great Impressions. I am happy with how it came out even if it did take four days to come together. Watcha think? 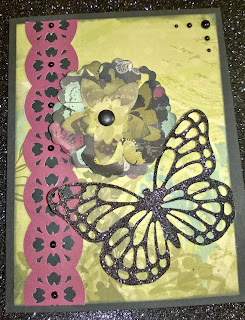 I borrowed a design that a friend used on one of her creations to make this butterfly card. The papers are retired Close to My Heart. I think this will go to one of the teachers that is retiring at my school this year.
Posted by Unknown at 3:10 PM 0 comments 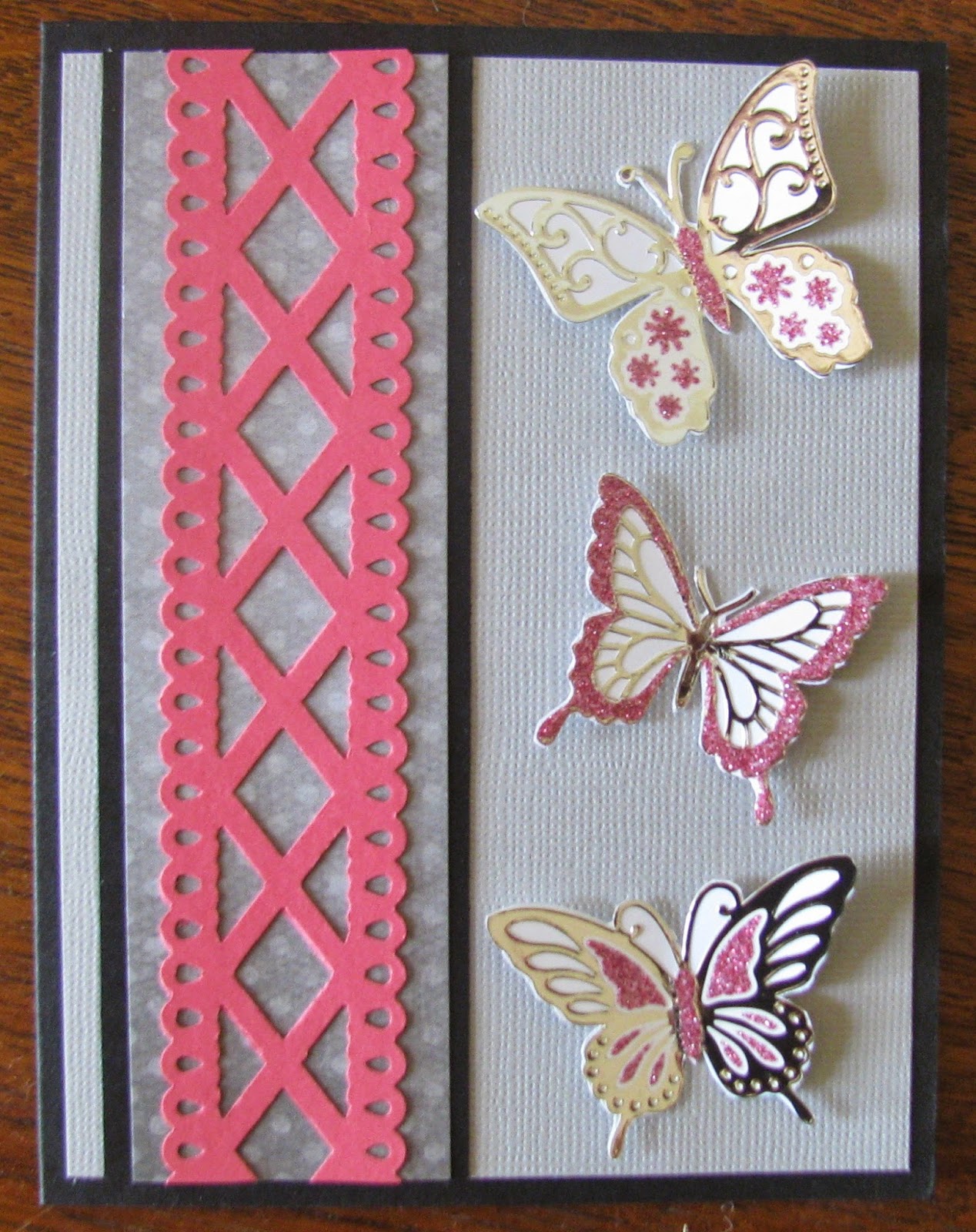 While cleaning off my sadly neglected crafting desk, I ran across some items I had purchased at a StampFest event in Orlando last year. Yes, I never stopped collecting new toys! I pulled together a few other scraps that were laying around on the table and came up with this quick, very simple card. I am thinking I see pattern of pink butterflies in my work lately. Maybe it's a promise of spring being on the way? Surely hope so!! 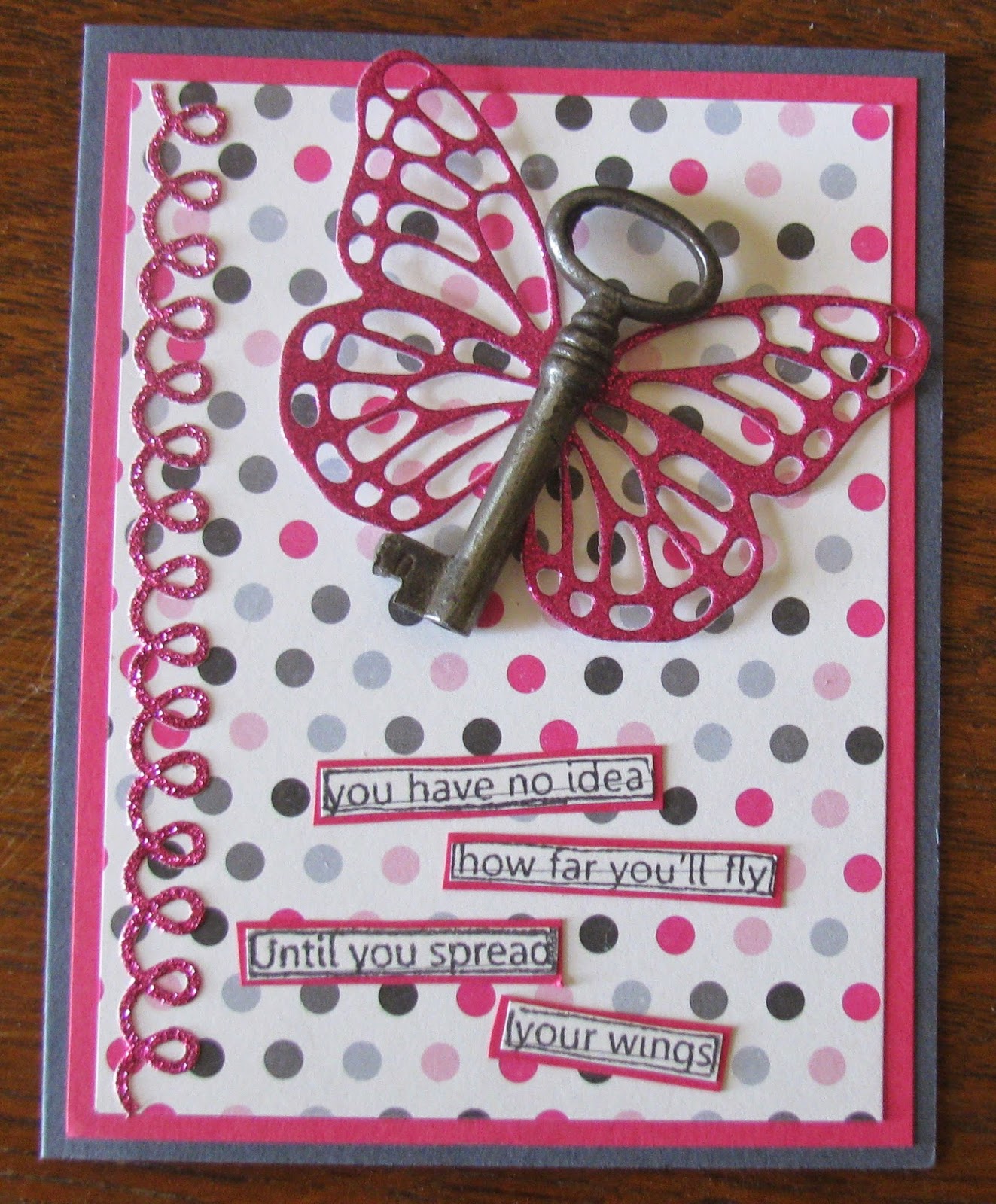 Hi!! I can't believe it has been over two years since I have posted on my blog! There have been a lot of changes and challenges over the past two years, so I guess the time has just slipped away. For anyone who ever read this blog back then, Kyli is now cancer free and just celebrated her seventh birthday! I also have a grandson who is sixteen months old. He was just diagnosed with a lifelong condition that will present a whole different set of challenges, but he is just as cute as he can be and such a fun guy to be around. Sadly, I lost my father back in January. My husband and I spent a great deal of time getting his house ready to sell and get him moved down to Florida with us. He made the permanent move in June.
There was so much more, but I really wanted to share this card. It is one of a couple I made this weekend. I haven't spent much time in my stamping room and it took a while to come up with the first card, but this one seemed to come together pretty easily. I saw the idea of using a key for the body of a butterfly while wasting time on Pinterest and just had to try it. I think it came out pretty well!
Posted by Unknown at 10:54 AM 0 comments

Email ThisBlogThis!Share to TwitterShare to FacebookShare to Pinterest
Labels: butterfly, key, stampin' up 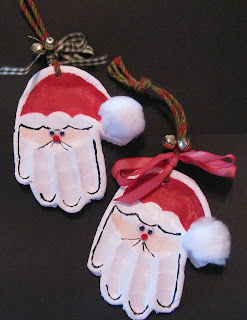 I wanted to share a couple of the projects I have been working on over Christmas break. The instructions for the Santa ornaments above were found on Pinterest and I just knew Kyli would love making these. We made six of them and she gave them to the family as Christmas presents. She was so proud to give them out! They were made with a simple salt dough and baked. Then they were painted up and embellished. Lots of fun to make!
The next project got started when I received a pair of fingerless gloves that were knitted by a friend in New Hampshire. Other people saw them and wanted to know if I had made them. That got me thinking that surely there were crochet patterns for them. Obviously, these are not fingerless gloves. While I was making the crocheted version, Kyli decided she wanted some, too. I dug out some old crochet magazines I had kept for particular "someday" projects and we found the instruction to make these adorable snowman hat/mitten/scarf sets. Kyli picked her colors and became a slave driver for me to get them done. Made hers the day before Christmas Eve while she was staying with us. They actually work up pretty quickly and my rusty crochet skills came back to me in a short time. 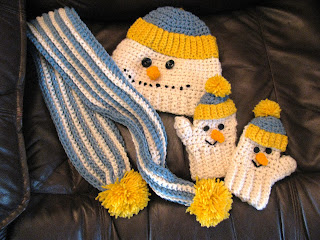 After I got done with her set, she decided that Liberty, my granddaughter who is six months younger than Kyli, had to have a set also. We don't get to see Liberty nearly as much as we do Kyli, but they are great friends when they do manage to get together. Kyli picked colors for Liberty's set, and it was game on for the second set...all day Christmas Eve! 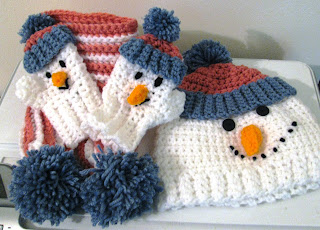 And here is a picture of Kyli and Liberty together with Liberty showing off her set. It was about 70 degrees here on Christmas Day, so Kyli didn't have hers with her when we took the picture. 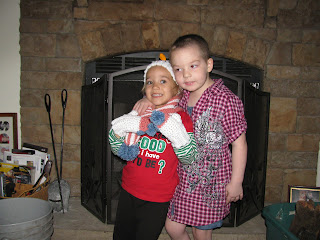 Before I go, I wanted to share our good news about Kyli's progress. She went to clinic yesterday and received chemo via her port. Her counts were good and she will now enter the maintenance phase of her treatment. She will only go to clinic twice a month as long as things continue as they have so far. She will receive chemo there and will also take chemo orally at home. As you can see, her hair is starting to come back in and the docs say this will continue. She has responded very well to the treatments. Negative side effects have been minimal and they say that this should also continue for her. She still has 2 1/2 years of treatment, but we are so grateful for the doctors' good news yesterday! We are also grateful for all the prayers that have been lifted up on Kyli's behalf and ask for continued prayers for healing.
I hope you have had a wonderful Christmas season with your families. Wishing you a blessed New Year as well!!
Posted by Unknown at 5:15 AM 2 comments 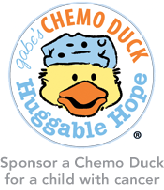 Find out about the Chemo Duck program and how you can help. This has helped Kyli so much! 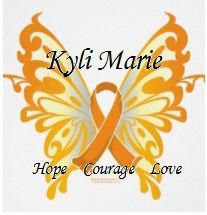 Until she is cured... 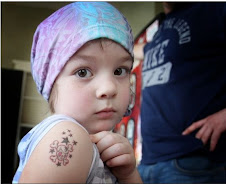 If I'm not at work or stamping, I am probably spending time with this little darling...my granddaughter, Kyli. 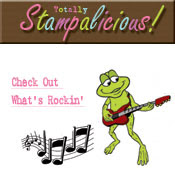 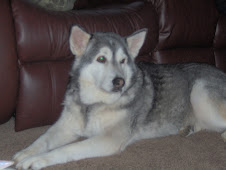 Ice follows me when no one else does! Her favorite place to be is my stamp room!

Stampers that inspire me! 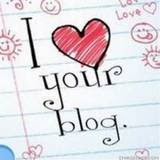